Inkling, a font created from characters that appear in the game Splatoon—seen on Sunken Scrolls, in Octo Valley, written on in-game gear, etc. 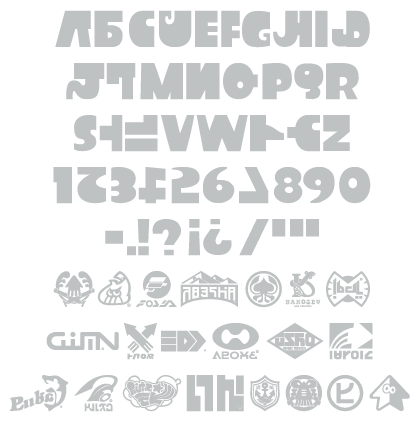 17 distinct alphabetical glyphs (excluding rotations/mirrored versions) of this writing system have been seen in-game so far. I've vectorized and mapped each character to its closest English (Latin alphabet) equivalent, when possible, so typing English words in this font will lead to somewhat readable text. Unfortunately, Inkling is essentially gibberish—in-game Inkling text cannot be translated and in most cases has no meaning (i.e. the choice of which glyph goes to which character in this font was completely arbitrary, but made to expedite being able to type the characters you want).

By no means does this font provide all the non-English characters seen in-game, as multiple writing systems exist; the characters in this font are those that are the most predominant and widely used.

IMPORTANT NOTE about how this non-standard font works and how to type the 100+ (!) different characters:
As seen on in-game materials, many glyphs have rotations and mirrored versions of them. I've included these characters in the font via uppercase letters and ligatures (make sure you don't have them disabled!)

Some symmetrical characters have no need for certain mirrors (e.g. 'E' and vertically-flipped 'E' are identitcal). Typing these characters twice will simply result in two of the glyph—the comma delimiter does not have to be used here. This applies to the following characters: entEINT

Letters listed under "Other" in the list of available characters above will not produce their designated character, but rather one of the various symbols from in-game such as brands and other logos. Image-based characters are listed below:

The dolphin logo is mapped to =.

The tentacle logo is mapped to +.

The Squid Systers logo is mapped to _.

The White Tee (いか t-shirt) logo is mapped to <.

The White Anchor Tee logo is mapped to >.

The Splatfest logo is mapped to ;.

The ヒ "copyright" symbol appearing in many logos is mapped to ©.

The wakaba logo found on the back of the Basic Tee is mapped to ®.
Expand

THIS FONT MAY NOT BE USED FOR COMMERCIAL PURPOSES.
PLEASE GIVE CREDIT IF USED.

This text should be in Inkling if you have the font installed!
Please direct any questions to eli (frozenpandaman). Feel free to shoot me a message via Twitter, Reddit, or email.
質問があれば、ツイッターで連絡してください。日本語OK。
I'd like to see anything you make with this font!